So by now you've installed a lightweight Linux operating system on your aging but still mighty Powermac, and since its a low end system (like, say a 500mhz, G4 upgraded Blue and White G3) you're gonna want to install some lightweight apps. Top of that list should be a lightweight web browser, since browsers are arguably the most important, most used and most vulnerable of any software on your system. Firefox is the default browser on Lubuntu 12.04, and gives a user tremendous flexibility with its megaload of extensions. It may take awhile to launch, but after that I find you can still use it to its fullest potential, even at 500mhz. Sometimes though, there is simply no substitute for speed, and just because your machine is older doesn't mean it can't be as fast as the day it was made. Or the day it was upgraded.

Almost all of the browsers I'll be looking at here today are webkit based, since pretty much nothing with a Gecko rendering engine can be considered lightweight in 2013. It should also be noted that most of these are either not available or have no equivalent on OS X, or you’d have to port the bastard yourself. These can all be installed from synaptic package manager, or, from the commandline if you like that sort of thing.

Midori is a German developed webkit browser, and is the default browser on many lightweight x86 Linux distros, such as Bodhi and some Puppy flavors. While being lightweight and fast it also has many of the features you'd expect with a modern browser such as a sparkling GUI, tabs, extensions, some adblocking, etc. I've used, liked and recommended Midori to others in the past, but really can't do so today, at least not on PowerPC Linux. In a few weeks of using it on Lubuntu 12.04 it has been utterly crash-tastic. Like, once a session out of the blue it will lock up and go down for the count. Purging and reinstalling the app garners no improvement, and the error logs are confusing at best. The version in the PowerPC repositories is 0.4.3, which is now a full six version revisions behind the current 0.4.9 release, which may have something to do with these issues. Hopefully a newer version will become available soon, in which case I may try to love it again. Until then, the Doctor says: Avoid. 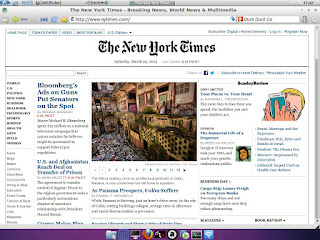 Surf is a commandline based browser that is pretty much the definition of lightweight. Running a browser from the commandline is probably not for everyone but in return you get hellacious speed with virtually no overhead. On x86 distros with ancient hardware and low RAM it became my browser of choice last year. A Surf session takes less than 10 MB of RAM to launch a window, and that folks, is extremely impressive. It's available in the PowerPC repos, however, I was (despite quite a lot of effort) unable to get it to run stable on Lubuntu 12.04. Windows will launch, then close almost instantly. This may also be a version issue, as the version in the repos is 0.4.3, while the current release is 0.6. I love it on x86 so much that I tried to compile it for PowerPC, but was missing a ton of dependencies, so I gave up on it for now. I left Surf in the review in the hopes someone with better programming chops could get it running and report back on how he or she achieved it. 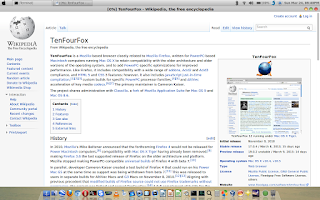 Links2 is a text/graphical browser which may be familiar to some as its based on the old text only Links browser. Fair warning, it is not for the lovers of eyecandy, and only supports HTML 1.0 so using it is kinda like what the Internet was in 1995. For us old fogeys (like the Dr.) who used Netscape 1.0 (honestly, that was my first web browser, and I BOUGHT it, kids) this is not such a bad thing. Over a number of hours of testing it seems very stable on Lubuntu PowerPC, and having inline images makes it seem almost mo-dern. Text field entries will appear as single lines, and searches and the like can be entered simply by clicking on the line.

Navigation is dirt simple, typing "g"(for go) brings up a url address window, "z" gets you back from whence you came. If you forget the commands they are all accessible in hidden submenus found just to the right of the very small back arrow found in the upper left hand browser window. Pass your cursor over them and all shall be revealed. If all you want to do is READ the web, but still have a pretty picture or two, Links2 could be your new best friend. Plus, all your friends will wonder what on earth you are doing on Netscape 1, which is, as Miley Cyrus might say, pretty cool. 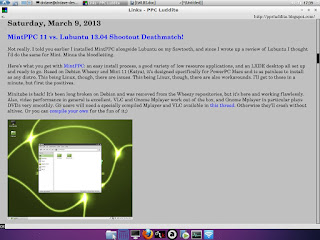 So what is the image that the name XXXterm brings up in your mind? I seriously thought it was some kind of terminal based porn downloader, and I don't think I'm alone. Well, actually XXXterm is just another uber lightweight webkit browser, first brought to my attention as its the default browser in ConnochaetOS, the successor to Deli Linux. ConnochaetOS is designed to work on REALLY old x86 hardware, like, umm Pentium I 100mhz old, so a lightweight browser on hardware that ancient is critical. The developer seems to have finally gotten the word that his choice of name is a tad….ummm, confusing, and has renamed XXXterm "Xombrero" in its most current release. XXXterm is what's available in the PowerPC repos and it seems largely the same as Xombrero on x86 to these eyes.

The main benefit of using this browser, besides speed, is tight cookie managment. The world and his (Big) brother now tracks your movements on the world wide internets, and XXXterm gives the user tight control over what cookies will end up on your hard drive. I could go into far greater detail, but you are best off just reading the wiki. In terms of speed it seems almost as zippy as the other lightweight browsers, but you still get tabbed browsing, a url address bar, back buttons and a search bar where you expect them, though the search window does not appear to be working at the moment. Everything is else you’d expect in a modern browser is available via keyboard commands. Stability on Lubuntu 12.04 PowerPC is good to excellent, and besides, any application that has the Fight Club bar of soap as its icon has to be worth its salt. Definitely Doctor recommended. 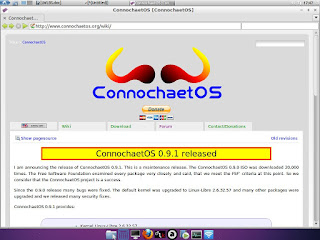 Ok, I'll say it again. I just love this piece of software. Its just...bloody incredible. While perhaps not quite as lightweight as surf or Links2, it more than makes up for that with blazing speed and stability. I can't recall it ever crashing on me, either on the stormtrooper or any other machine I've installed it on. It's configurable, extensible (sort of), and gives a user almost total keyboard based control of their browsing, so much so that it's possible to barely even touch the mouse while browsing. Being webkit based its fully mo-dern, and even on “slow” hardware it renders pages fast. Do not pass go, do not get out of jail, download luakit today. Thou shall not be disappointed. Note: Be very careful when you are entering text into a field however, make sure you are actually in it, or a simple keyboard command like "d" could delete your tab, or even end your session. And that's annoying. 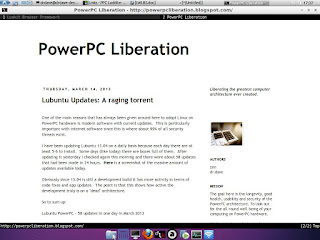 This here Linux PowerPC browser smackdown is by no means complete, and as with most things, your mileage may vary. I would love to hear about other lightweight Linux browsers you've used, and what your experiences have been. Netsurf and Dillo, for instance didn’t quite make the cut for this review, but you can surely download and try them out on your own if you are curious.

On lowend hardware its all about finding the right software for the job at hand, and hopefully one of these browsers will hit the sweet spot for you.
Published on Monday, March 25, 2013