UPDATE 7/5/2015 - I referenced the improper SMP kernel for G5 machines.  This has been corrected.

As almost all of us know, Debian's latest stable release, Jessie, went live this past month.  I debated whether I would do an in place upgrade using apt-get or if I would just start from scratch with a fresh new install on my dual-core G5.  The latter option won for a couple of reasons, the biggest being that I wanted to see what worked and didn't work right out of the gate with this latest release.

The install was straightforward and almost identical to the installer for Wheezy with one major noticeable difference. The Jessie installer will give you the option to select your preferred desktop environment you would like installed. Of course, the ability to add in the necessary yaboot parameters for indicating your preferred desktop environment when running the installer have existed previously and still do, but it is a nice change for those not quite as technically minded.  Personally, I prefer LXDE, so I went with that.  If you like to live on the edge, go ahead and select more than one. Otherwise, everything else again, is almost identical.

One other thing to keep in mind if installing this on a G5 PowerMac is that you will want to make sure you are installing the 64-bit version of Jessie as well as installing the SMP (symmetric multi-processor) kernel so that it can take advantage of either your multiple CPUs or cores.  Just to put your mind at ease if you are still unsure, every model of G5 is 64-bit capable. Jessie would run on the non-SMP kernel, but only one core/CPU would be utilized. However, if you just load the installer up with the defaults you shouldn't really even need to worry about these two things.  If you've already installed Jessie and want to make sure you are running the system with both of these features run the following command:

You should get something similar to the following with both SMP and ppc64 included in the results:

While on the topic of installation, if you are new to Debian/Linux and/or Debian on PPC, I would encourage you to read through the install guide found here. I consider myself very well versed and experienced when it comes to working with Linux, but this guide taught me many things I previously did not know or never really fully understood.   The guide is available in several formats, so feel free to use your preferred choice. There are still many hyper-links I'd like to follow within that guide to further my knowledge and understanding of Debian/Linux and running it on the PPC architecture.

Once the install was complete, I rebooted to the login screen and was greeted with screwy looking and unusable results.  In regards to graphics, keep in mind that I have a flashed nVidia Quadro 4500 FX card so I'm free from the Radeon/KMS madness, but that's not to say noveau has several issues of its own. After just a tiny bit of reading on the PowerPCKnownIssues page, I learned I would likely have to disable hardware acceleration for things to work. By the way, I would definitely check out that page as well regardless as it covers many if not all issues affecting PowerPC users and most of it pertains to Debian installs as well.

So in my yaboot.conf I added the following line after the initrd line of my main Linux image and ran sudo ybin -v afterwards:

I was then able to reboot in a working desktop environment. Despite the lack of 3D acceleration, the software rasterized graphics felt incredibly fluid (especially after installing and running compton) with still plenty of CPU cycles still leftover for a plethora of other tasks. Running glxgears givings me on average only about 116 FPS, which I know the nVidia card could crush if it could be put to use with 3D acceleration.

On the same graphics front, I have not yet been able to enable both of my 20" Apple Cinema displays so right now they are mirroring each other (the default behavior). I went ahead and installed arandr (a GUI-wrapper to xrandr) to try and enable both monitors, but each time I try to apply the changes after positioning the displays in the desired fashion, I'm logged out of my desktop session. So at this point, that aspect is still ongoing project.

Of course, I still had to install the necessary firmware for the G5's Airport card, but info on installing it can be found on the Ubuntu PowerPC FAQ page.  Another piece of hardware that was not working off the bat was sound, but running alsamixer and hitting the 'M' key to un-mute the Master Volume took care of that.  My 5 USB port Sonnet PCI card worked from the get go, but I have not yet tested connectivity with the Sonnet E4i card and G5 Jive, but will post results once I have done so.

Lastly, in regards to any issues up front with installation, a few have reported uncontrollable fans revving up to max RPMs.  If you happen to be one of these unlucky few, run the following command to load the necessary module that controls fan speed.


If that resolves the issue, be sure to add these modules to /etc/modules so it is loaded at startup.

Other than that, I'm still in the process of customization, but for the most part have not ran into anything else unusual or come across any other unknown and unreported bugs.  Overall, apart from the no 3D acceleration, I'm quite impressed and look forward to using it daily on as one my main workhorses. In regards to graphics, I have not lost faith that some day in the future I will once again have 3D acceleration.  I was reading it possible get 3D acceleration back by compiling and installing an updated version of the nouveau driver.  I see that as quite a hill to climb, but at the same time I view this as another opportunity to learn and expand my knowledge of computing.  As has been said here and on many Linux forum posts all over the web, Linux is not for the faint of heart.

Here is a screen shot showing a few running applications. Notice the video I somehow randomly stumbled upon while putting together this post. 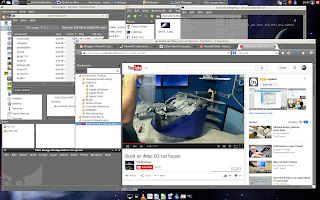 If you have a G5 you've recently installed Jessie on, feel free to share your experiences, bugs, or fixes in the comments below. If I discover anything else that could be useful or helpful when doing an install on a G5 I'll update this post unless the fix and/or info warrants an individual post.  Also, just know I'd be glad to help anybody who runs into any other issues with Jessie on their G5.
Published on Monday, May 25, 2015